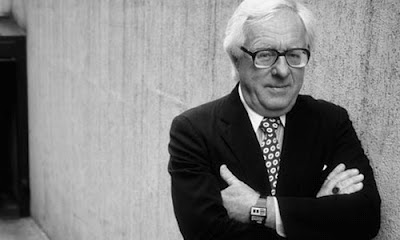 Ray Bradbury, author of Fahrenheit 451 and one of the greatest science fiction writers of the 20th century, died at 91 two days ago.

I leave with you, as an homage, a fragment of one the most beautiful stories written by him.

The many good-bys. The short farewells. And now the great loose brain was disintegrating. The components of the brain which had worked so beautifully and efficiently in the skull case of the rocket ship firing through space were dying one by one; the meaning of their life together was falling apart. And as a body dies when the brain ceases functioning, so the spirit of the ship and their long time together and what they meant to one another was dying. Applegate was now no more than a finger blown from the parent body, no longer to be despised and worked against. The brain was exploded, and the senseless, useless fragments of it were far scattered. The voices faded and now all of space was silent. Hollis was alone, falling.

They were all alone. Their voices had died like echoes of the words of God spoken and vibrating in the starred deep. There went the captain to the Moon; there Stone with the meteor swarm; there Stimson; there Applegate toward Pluto; there Smith and Turner and Underwood and all the rest, the shards of the kaleidoscope that had formed a thinking pattern for so long, hurled apart.

And I? thought Hollis. What can I do? Is there anything I can do now to make up for a terrible and empty life? If only I could do one good thing to make up for the meanness I collected all these years and didn’t even know was in me! But there’s no one here but myself, and how can you do good all alone? You can’t. Tomorrow night I’ll hit Earth s atmosphere.

I’ll burn, he thought, and be scattered in ashes all over the continental lands. I’ll be put to use. Just a little bit, but ashes are ashes and they’ll add to the land.

He fell swiftly, like a bullet, like a pebble, like an iron weight, objective, objective all of the time now, not sad or happy or anything, but only wishing he could do a good thing now that everything was gone, a good thing for just himself to know about.

When I hit the atmosphere, I’ll burn like a meteor.

The small boy on the country road looked up and screamed. “Look, Mom, look! A falling star!”